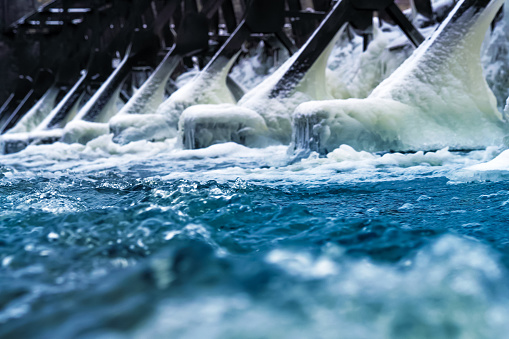 As snows melt voluminous amounts of water used to flow east and out to the sea.  This happens in many parts of Australia such as the northern tropics where the tropical downpours have nowhere else to go but out to sea.  The northern central districts get spasmodic rain and are extremely barren.  Today this area is in severe drought and you can almost cry seeing the amount of water that pours into the ocean.  Someday a government has to be brave enough to take a stand and build some dams or pipe water to dry areas.

The Snowy Mountains Scheme collects and stores the water and diverts it through trans-mountain tunnels and power stations.  The water is then released into the Murray and Murrumbidgee Rivers for irrigation.

The Scheme took 25 years to build and was completed in 1974.  More than 100,000 people from over 30 countries came to work on the scheme and divert the water to farms and build power stations to generate renewable electricity for homes and industries.  In 1949 many migrants with engineering or construction skills and experience in working in alpine regions were targeted for the Snowy Mountains Hydro-Electric Scheme.  The Scheme has 80 kilometers of aqueducts, 140 kilometers of tunnels, 16 large dams and seven power stations, two of which are underground.

The project commenced in 1949 with a goal of diverting the Murrumbidgee, Snowy and Tumut Rivers in South Western New South Wales to provide irrigation water for the western side of the Great Dividing Range and in the process generate hydro-electric power.

Out of the 100,000 people who worked on the scheme 121 lives were lost in industrial accidents.  The workers were Australian born, German, Greek, Irish, Italian, Norwegian, British, Polish and Yugoslav.  Most of the migrant workers on the Scheme arrived under assisted migration schemes.

At the start of the scheme, Prime Minister Ben Chifley declared it a national milestone – important for drought relief, power generation and the prosperity it would bring the nation.  Work was finished in 1974 with a total cost of $820 million dollars.

This project was more ambitious than anything that has been attempted before, engineers needed to develop new tunneling and construction methods that revolutionized industry around the world. The Scheme used one of the world’s first transistorized computers called “Snowcom” from 1960 to 1967 that ensured the efficiency and success of the project.

The work was hard and the conditions tough. A lot of the work was underground; there was a lot of tunneling, often through solid granite rock.  The work was dirty, wet, nosy, and smelly and dangerous.

Living conditions were hard in the camps and towns built in the mountains to house the workers and their families.  Often the water would freeze in the pipes.  Some of the workers had “post-traumatic stress disorder” from World War 11.  There was no time for people to adjust and they just had to get on with it or leave.

There was discord between the Poles and the Germans.  Walter Hartwig the German Engineer who recruited most of the tradesmen was called in to settle a conflict between Germans and Poles.  He brought the two groups together and spelt it out in straight terms.

“We are all new Australians…This is an honorable title which is not to be abused.  The nonsense of Europe has no place here”.

In order to restore the wetlands, water is being released from Jindabyne Dam into the Snowy River.  It’s the largest release the thirsty stretch of the Snowy River below has seen for more than 40 years.

With the regulation of the river, flows dwindled, leaving sediment to build up over the riverbed and smother habitat for aquatic plants and animals.

The New South Wales and Victorian governments are working to restore the Snowy River’s mighty flows and the aquatic habitats they support downstream.

The first release in 2011 of almost 17 billion liters of water over 10 days was designed to dislodge sediment from the river bed and flush out algal growths left to thrive in stagnant pools.  This release was followed by a further release of almost seven billion liters in April 2011.

Thanks to an agreement between the three governments, water cascading from the Jindabyne Dam wall will be a feature of the Snowy River.

A new release pattern is being trialed over the 2013/14 water year and is designed to better mimic the natural flow characteristics that are seen in Snowy Mountain Rivers.  This includes a higher degree of daily and seasonal flow variability, but still maintaining the need to ensure flood events occur in the Snowy. Over the course of this water year, 190.6GL will be delivered to the Snowy River below Jindabyne.  The release regime will differ from previous years, with several high flow events scheduled during spring and early summer. Five of these events, including the Flushing Flow, will involve an 8-hour peak through the day that will cause the river level downstream to fluctuate substantially – much like a natural high flow event in an un-regulated catchment.